The Ultimate List Of Team Building Activities Your Organization Will Love

All the latest from DaySmart to you

Days spent in the office can be a grind, not only for you but for your employees as well. Over time, this can cause resentment to build between coworkers, negatively affecting your team. For this reason, on occasion, it’s wise to hold activities for team building.

These activities are designed to foster empathy and friendship between coworkers, ultimately helping to strengthen the work team as a whole.

The Best Activities for Team Building

There is no shortage of morale-building games to play with the team at work. Some of the most popular of these games include the following.

A summertime classic, Water Balloon Toss is a simple game which involves tossing water balloons back and forth. Typically, the game is played in teams of two, with two teammates tossing a single water balloon to each other from progressively further distances.

Each time a toss is completed, the receiver must take a step back before making the next toss. This pattern should continue until the water balloon breaks, either from hitting the receiver’s hands too hard or by being over or underthrown.

The game is won by the team with the last remaining intact water balloon. If two or more teams tie, you could either call it a draw or have a sudden-death throw-off.

A fun game which fosters communication and teamwork is Blind Drawing. This is a game played in teams of two, wherein one teammate describes a specific picture while — based on his or her teammate’s description — the other teammate attempts to draw it.

If you want to be competitive about it, you can have someone judge the pictures at the end of the game. If you’re just looking to have some fun, you can go without the judge.

Egg Drop is a game which requires its players to protect an unboiled egg from a 10 to 20-foot drop. This is done through the creation of a package, most typically made out of straws, newspaper, rubber bands, tape, and balloons. Once each employee has created his or her package, he or she will place his or her egg into said package and drop it from the first or second story of the office building.

If the egg goes unscathed, it stays in the game. If it cracks, it’s out. The point is to have the last egg standing.

Note, if two eggs go uncracked from the same level, they should be dropped from an even higher level. This increase in height should continue until there’s only one egg remaining.

Flip it Over is a game in which a large group of people stands on top of a large cloth (leaving roughly 1/4th of it open) while attempting to flip it over. It fosters teamwork, communication, and perseverance.

If a member of the team steps off of the cloth, the team is automatically disqualified. The point is to fully flip the cloth whilst keeping constant contact with it.

Create a list of items to search for, break your employees up into teams, and see which team can complete its list first. Whether you keep things in the office or have teams venture outside the office, your employees are sure to have a great time. It doesn’t matter how old we get, scavenger hunts are always a good time. And considering they promote communication and teamwork, they make great team-building exercises as well.

It doesn’t matter how old we get, scavenger hunts are always a good time. And considering they promote communication and teamwork, they make great team-building exercises as well.

Create a list of items to search for, break your employees up into teams, and see which team can complete its list first. Whether you keep things in the office or have teams venture outside the office, your employees are sure to have a great time. 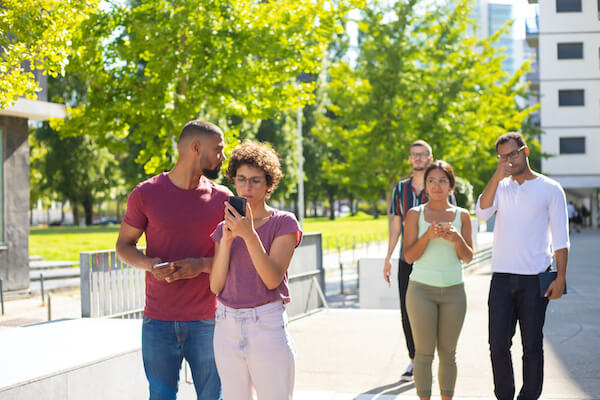 Frostbite is a game in which an “immobile” leader must instruct 3 or 4 of his “blind” teammates to perform specific tasks. The leader must sit still in a designated area while his teammates move blindfolded throughout the room, picking up specific items and bringing them to specific locations.

The goal is for the teammates to perform all of the tasks adequately before time runs out (usually around 30 minutes). The team which finishes their tasks first wins the game.

Tug-of-war is a classic game which promotes teamwork and friendly competition. If you’re looking to bring some fun to the office in a productive way, it’s the game to play.

The most simple form of tug-of-war involves a single rope with a team pulling on each side. The first team to get the middle of the rope over its line wins the game.

However, you don’t have to limit the game to one linear rope. Another option is to tie a series of ropes together and have teams pull from 4 or 6 sides. 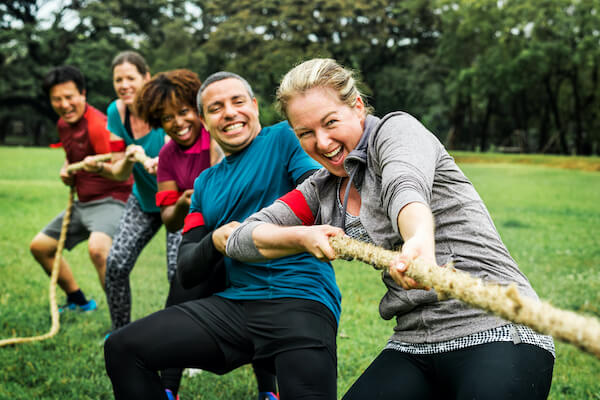 Who doesn’t love Jeopardy!? Odds are, your employees would love to play at some point throughout the workday.

Throw together some questions, create a makeshift Jeopardy board, and have your employees face off against one another. It’s simple, but will almost certainly bring some joy to the office.

Bob the Builder is a game consisting of 3 or 4-person teams. The goal of the game is for each individual to make a pyramid out of 10 paper cups.

To start, space each team member around 10 feet apart from the next. Then, once the game begins, have the first team member create a cup pyramid with a base of 4 cups.

This is completed until the last member of the team has constructed a pyramid. The first team to complete the last pyramid wins the game.

Bring The Office Together With Activities For Team Building

And there they are, the absolute best activities for team building. If you’re looking to bring the office together, these activities will help you to do so.

Need help improving your business or business systems? DaySmart can help. We manufacture business software to help with a wide variety of tasks, including marketing, payments, accounting, and more.

About the author: Daysmart Software